A public access to a large lake near my home is configured around a finger of land that sticks out about a 150 yards from the boat ramp. This is actually a manmade barrier that forms a breakwater for the string of boats that launch and land at the site – one of the most popular on the lake.

Even with the heavy boat traffic it’s a pretty good place to fish from the bank. The cover is mostly rip rap but it has been in place long enough to have sprouted some vegetation and a couple of trees near the waterline.

The weedy cover is easy reach with fly or spinning tackle and usually harbors a few bluegill and the occasional largemouth bass. I once saw a kid with a Snoopy rod catch a 3 pound largemouth from a patch of weeds no bigger than a bathtub, about 20 feet from the ramp while two guys were launching a Ranger.

I wanted to fish for a couple of hours yesterday afternoon so I made the 20 minute drive to the ramp. It was mid afternoon, sunny, and nearly 100 degrees with sweltering humidity. I went anyway.

One positive thing about fishing in triple digit heat: you usually have the place to yourself. There was no one else in sight. I strung up a rod and headed for a spot on the rip rap where I could reach both an overhanding tree and patch of weedy cover.

I arrived to find a mayfly hatch in full force. The bugs were swarming the willow tree that overhung the water.

As I approached it was like walking into a living cloud. I’ve seen and fished mayfly hatches from the water but this was the first time I’d literally walked into a hatch. The little insects surrounded me. They covered my hat and glasses; lit on my face and arms; crawled in and out of the neck of my shirt. It was delightful; nature, friendly and up close.

Many anglers associate mayflies with trout but they also appear in bass and bluegill country. It was early in the day for hatch this size. They typically appear near dusk.

If you don’t know about mayflies their life above water is measured in hours; appearing like magic. After months (or years) crawling about the lake or stream bed as naiads (the word sounds a little muddy, doesn’t it?), the critters swim to the surface, hatch into delicate mayflies, fly to a nearby tree or rock and rest while their wings dry. Then they gather their bearings, mate and die, usually dropping back into the water, where fish feed with reckless abandon. The females deposit their eggs in the water and the process begins anew.

I stood amid the mayflies and marveled at the miracle surrounding me. Then I remembered the camera in my pocket and clicked a few photos.

Later, at home while uploading the pictures to my computer, one of my daughters sauntered into my office and asked what I was doing. I told her about the mayflies and clicked on a self-portrait which showed some mayflies crawling on my cheek and neck. 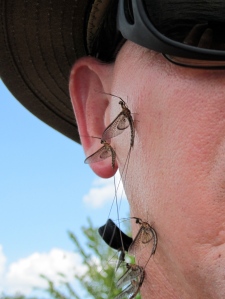 She made a noise of disapproval. I have two daughters. One will fish until dark. One is good for about 15 minutes. This was the 15 minute girl. She loves nature and wildlife but is not fond of bugs. She usually brings a book while dad fishes.

“Why would you do that?” she asked.

I flashed through a myriad of responses then picked the one I thought best captured the moment; most accurately reflected how I felt.

“Why? Because they’re little miracles.”