I spent an interesting afternoon in Elizabethtown, Ky., recently at the Bucksnort Longhunters’ 18th Century Market Fair. This is an annual and popular gathering hosted by the Longhunters.

The large crowd was curious and seemed to be in a buying mood. About 30 venders were hawking their wares, which ranged from flintlock long guns and cap-and-ball pistols to long bows and haversacks to ink wells and nib pens. If you could have found it during the Revolutionary War era a copy of it likely was on display. Most of the vendors were dressed in period clothing, which added to the fun. 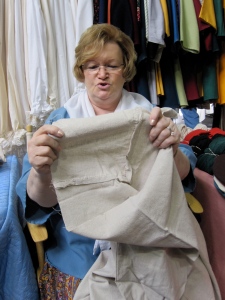 I discovered Patty Hughes (pictured) quietly working with a needle and thread behind a rack of clothing that would have been at home in any frontiersman’s cabin. As a seamstress her talents would have been highly valued in 1780. She was working on a trader’s shirt.

“Clothing then didn’t have round holes for arms,” she explained. “They were just squares and rectangles sewn together.”

This didn’t mean the garments were poorly made or of low quality. Far from it.

“Eighteenth century clothing is very interesting,” said Hughes, whose day job was that of a neo-natal intensive care nurse prior to her retirement a couple of years ago. “It was very comfortable and very well made.

“These were called ‘trader’s shirt’s’ by the way because people traded stuff for them.”

The square arm and neck opens were corrected by adding gussets.

Hughes said there aren’t many original period clothing pieces left – at least not ones that were worn daily by common folk.

“They were literally used up. When they were to worn to be used for clothing they were used as (ball) patches or for something else. Nothing was ever just thrown away.

“We could probably take a lesson from that,” she added.

Yes, we probably could.