LEWISTON, NY – With an afternoon to kill before fishing Lake Ontario tomorrow, I joined Alan Clemons and Lawrence Taylor for a brief tour of Old Fort Niagara www.oldfortniagara.org Monday afternoon.

The Fort can trace its history to 1679, when the French established Ft. Conti, a trading post. That outpost didn’t last long nor did the Ft. Denonville, the one that followed it. But in 1726, the French (who were still in charge but not for long) got down to business and built the Machicolated House, later dubbed “The Castle” by its American inhabitants. It’s easy to see why. That’s it in the photo. The buildings to the left came later. 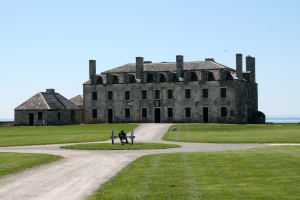 The imposing three-story stone structure was designed to withstand any military firepower its enemies could throw at it. It has stood guard over the Niagara River for nearly 300 years, built on the point where Lake Ontario feeds the Niagara River, about 15 miles upstream from Niagara Falls.

Today, the view from “The Castle” stretches to Canada and beyond. Near the food of the cliff is “the bar,” one of the area’s most high productive fishing spots.

I hope to try that one Wednesday.