The Corps of Engineers held the first of four scheduled public meetings last night (Thursday, 1/10) in Grand Rivers, Ky., to explain its plan to restrict tailwater boating access at 10 dams (four in Kentucky; six in Tennessee) along the Cumberland River system. 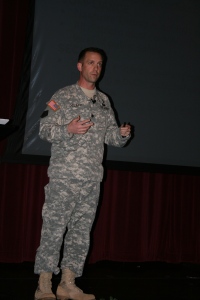 None agreed with what DeLapp had to say, which was that the Corps was making the restrictive changes so they would be in full compliance with current regulations, which have been on the books since 1996. Other reasons were cited, of course, including the need for additional safety for boaters and security against terrorist types. But the issue seemed to hinge on the regulation. Follow the link below to read it.

Whitfield was not impressed with the Corps’ stance.

“I’m personally disappointed because from the presentation it looks like the decision has already been made,” the congressman said to rousing applause. Whitfield later said he intended to work to prevent the Corps from making the restrictive changes.

Kentucky director of fisheries Ron Brooks said his agency is also against the plan. He came hoping to hear a compromise which wasn’t forthcoming.

“We have to disagree with the Corps on their stance on this,” said Brooks.

DeLapp, who had the first and last word, was apparently unmoved. “The Corps intends to follow the regulations. We’re going to proceed with enforcing the regulations as they are currently written.”

I’ll have a full report in Sunday’s Courier-Journal http://www.courier-journal.com/outdoors.

News and notes from the woods, waters and beyond.

A Blog for the Contemplative Angler and Outdoorsperson