Casey Creek is a nothing trout stream but it was one of Garvin’s favorite spots so here I am. 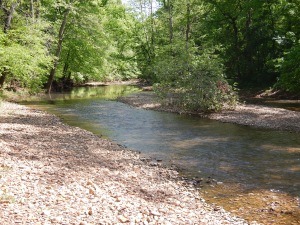 Barely a rivulet with a sand and gravel bottom that generates a cloud of silt with nearly every step, Casey Creek is a stream that’s often choked with blow downs and root wads strewn about from the occasional thunderstorm-generated torrent. It rises in Tennessee before spilling into Kentucky and winding northward, eventually feeding Lake Barkley, the final Corps impoundment on the Cumberland River. This is not exactly classic trout country. But the creek is spring fed, clear and flows surprisingly cold for about three miles. Eight times a year the state dumps 1,000 or so fresh-from-the-hatchery trout (mostly rainbows along with a handful of browns) into the creek from a county road bridge. The few trout that aren’t caught immediately by the locals quickly acclimate to their new surroundings. It was for these trout that Terry Garvin preferred to fish. 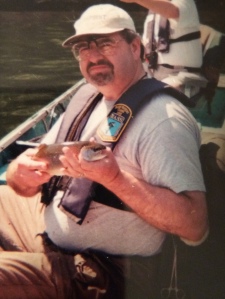 Garvin and I began fishing together more than 20 years ago, not long after we met. He wasn’t much of a fisherman then, but became one by way of a curious, sharp mind that he could focus to unusual purposes. He’s the only person I’ve known who could render trout fishing into nearly a purely intellectual contest of wills between fish and fisherman. This may sound silly but you wouldn’t think so had you ever fished with Garvin. It was remarkable to witness.

I am alone on the creek, which is not unusual for a weekday afternoon unless it is stocking day, which it is not. The last trout stocking was nearly three weeks ago.

The first pool upstream from the bridge was Garvin’s favorite spot so that’s where I start but a recent storm has wedged a cottonwood against the mud bank, clogging the run and pushing the current into a queer dog leg that plunges under the root wad. Garvin would have figured it out but after hanging up and breaking off on successive casts I move upstream, crossing the creek to reach a narrow chute that empties into a long pool that is big for this stream. A roll cast drops the gold flecked nymph at the head of the pool, where it sinks slowly, attracting a swarm of minnows.

I last saw Garvin on a Monday in April in Little Rock. We’d planned to fish the White River a couple of days that week; a trip that had been scheduled for months. But he’d been felled by terrible medical problems no one saw coming.

“Better reschedule,” he’d said and I’d agreed, although we both knew it probably wouldn’t happen. The following week I spoke at his memorial service.

On the third drift the leader darts and I set the hook. A buttery colored trout comes to hand. One is enough. I do not think I will fish here again. 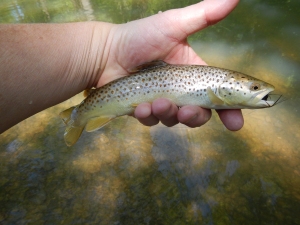